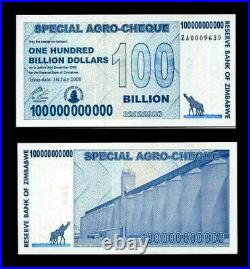 Zimbabwe 100 Billion Dollar Special Agro-Cheque. Numbers on your note may vary but will start with the ZA replacement note prefix letter code. This Blue-colored Zimbabwe Replacement (ZA prefix on note)100 Billion Dollar Special Agro Cheque measures 154 x 78 mm. It was released in 2008 and was originally intended for the exclusive use of Zimbabwean farmers, although they found their way into regular commerce as prices continued to rise. Printed on the banknote’s obverse side is the Reserve Bank of Zimbabwe logo and the denomination written in words. With two giraffes printed on the bottom-right. The reverse side features a grain elevator with multiple silos and two giraffes. The banknote’s security features include a solid security thread with a demetalized RBZ, Zimbabwe bird Type C watermark, and electrotype RBZ. This item is in the category “Coins & Paper Money\Paper Money: World\Africa\Zimbabwe”. The seller is “iraqi-dinar-store” and is located in this country: US. This item can be shipped to United States.